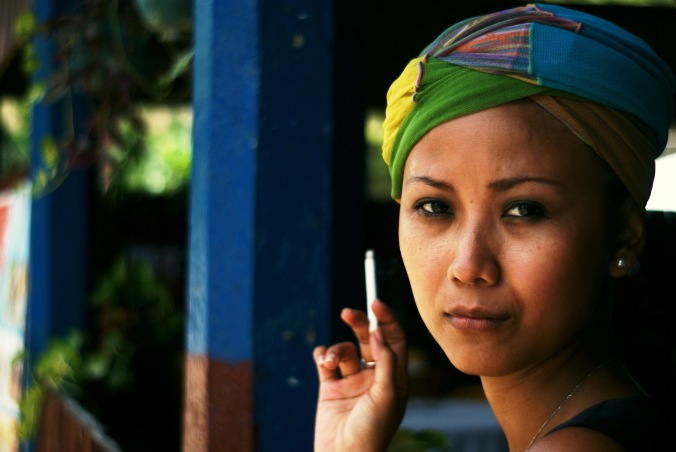 Seven years ago, I was invited to perform my poetry in Jakarta on one of the two nights of a literary venue.

I just finished, at that time, a poetry performance project with some young musician and artist friends and had successfully performed in two cities. However, the committee of the venue in Jakarta wanted me to perform alone, just me and my poetry, or in the man-in-charge’s own words: “could you just come without your boyfriend?” He sounded bitter, and he was wrong – my then boyfriend had nothing to do with art except that of making me cry. Love, love, love.

I left my little son with a neighbour whom I knew very well and went on a 10-hour train ride from jogja to jakarta.

An hour before the venue started, people were busy trying to contact me as I was still struggling to avoid the traffic jam, doing what batman does on my motorbike-taxi from the train station.

Thirty minutes later, I answered my phone and told them i was just outside the gate, trying to finish my street-food supper.

They kept me until last and told me not to smoke inside the auditorium: perfect!

I just stood there in front of the audience, in silence, for a good few minutes.

Then I began reading TANJUNGKARANG GHOSTS.

It was a long poem and as usual I hated my nervous + evil voice performance. and even better, it was probably my only performance that didn’t involve cigarettes

There was a killer silence even a few seconds after I finished reading. Then the traumatising applause. Then everybody got up to shake hands and to talk to each other on stage. Some came to me – people I used to know and people I didn’t want to know.

I tried my hardest to escape them so I could smoke outside. They found me outside and I was dragged to a table at the cafe to have another meaningless chat with other writers, established ones: the worst of kinds. This was exactly why I left Jakarta: I wanted to be alone.

I saw one of my ex-boyfriends there, a big man with sleek hair. He said in a cool tone, “sorry, I couldn’t stay until you finished.”

In a cooler tone, I told him it was ok, it was boring anyway.

I sat myself down and could see now hints of crystals in his eyes – they just didn’t go well with his build.

“It’s,” he paused and continued in a much less cool tone, “just don’t end up like Plath“.

I looked at him, ignoring the other writers’ comments and questions – they never listen anyway.

I have to say it was not the first time someone predicted I would end up killing myself or at least die young, in one way or another. they were people who claimed to know my life, my childhood, my family and my creative process through my writings or from what they heard and saw. In fact, I think Philip was the only boyfriend who didn’t think I’d kill myself. He thought I’d kill him – he’s that lovely!

Well, they thought wrong, not completely, because I was young, my life was jeopardised, I always ran away from communities and establishment. They couldn’t map me, it was scary for them.

But I am (theoretically) a fast-learner by nature and I learn from what I see, hear, feel; what I experience. I observe and take the time to analyse and I never stop talking to myself since I was four.

There is always the inner dialectic. This is how I claim myself to have recovered from my horrible experience of being abused as a child physycally by my father and sexually by my half-brother and other experiences throughout my teenage life and my grown up life without actually ending my life and, more importantly, without becoming a monster (not known to you anyway).

But, hey, people are just so hard to please! Not becoming a monster isn’t enough. They want more damage, they want more drama, they want doors and rat holes into my fragile, cheese-less little world.

I made “extreme” choices in my life, perhaps – leaving people, turning down opportunities, keeping my pregnancy while I had nothing – but I always did it consciously knowing, or at least willing, to take the risks, the risks others wouldn’t take. I did it because of what I believed.

There were times when I thought I was “shards of a glass, i can’t be fixed”, but I know now we are all chipped anyway.

I was shards of a glass, perhaps, at some point, I guess I had to work hard internally to fix myself and with a help of some magic glue: inner dialectic and beliefs. Among other things, I believe in kindness, evil, and ignorance; and that ignorance is the most dangerous of all. I believe I can still see in the dark and I believe in being alone as a statement, not misery. I believe in thinking too much is better than not thinking at all, except on a driving test. I believe the moment you stop talking to yourself is the moment you should stop talking at all.

Some people read my poems before they met me in person, and when they did for the first time they were usually surprised, not impressed to say the least. I was light, happy, and silly (I still am) – no signs of gloom and doom. They just couldn’t relate my persona to my writings. And then they saw me get up on stage and told me they were scared.

But my pain is my responsibility. It’s the price I pay for the wonderful things in my life such as my children’s smiles, my late mother’s recipes, stupid childhood fights with my brothers and sisters, my collection of designer shoes and bags, sincerity in strangers I meet, the warmth of the sun, the dancing rain over street lamps, a glance of falling leaves, my knowledge – all designed specially for me. would i exchange these things for a less painful life?

“Please”, he said again, having gained his cool tone back. I gave him a cheeky smile and a pat on his shoulder:

“Would you perform again tomorrow night?” the cynical man-in-charge pat my shoulder.

“Sure,” I leaned my face towards him with an unlit unfiltered cigarette between my lips, the man reached for his lighter and lit it. “If I’m allowed smoking.”

The man took a deep breath and sighed heavily, didn’t seem to have the charm to argue.

“Will you come back and stay ’till the end tomorrow?” I asked my friend.

I am now 30 years old, living in England. February has long gone, and I am still here.

I am still talking to myself.